The human disruption of the Earth’s climate poses an unparalleled risk of great suffering. We need bold actions towards reducing our impact. Transitioning the global energy industry towards sustainability is one of those actions. It is often assumed that the transition will be a slow, uncertain process. Although, it needs not be.

Benjamin K. Sovacool, Professor of Energy Policy, explored the time dimension of energy transitions in his 2016 paper “How long will it take? Conceptualizing the temporal dynamics of energy transitions.” Building heavily on it, I summarize my takeaways from his paper to show that, if we wanted, we could transition our global energy system in one or two decades.

Many energy transitions observed in the past have been slow, gradual processes spanning for many decades. Observing this fact, “Grubler hypothesized [a] number of factors that can [-] extend the time needed for a transition to occur. One is that no innovation spreads simultaneously, instead all undergo a typical S-shaped temporal pattern that takes months, years, or even decades to occur.” (p.204). The typical S-shaped pattern lends itself to be seen as a sequence of phases. For example, “Wilson concluded that four phases must occur in order, [-] each [requiring] substantial time” (p.204).

There are other theories suggesting similar phases. But beyond the notion of phases, other reasons can drag energy transitions for decades. Lund notes that “the inertia of energy systems against changes is large, among other reasons because of the long investment cycles of energy infrastructures or production plants.” (p.205). What’s more, from the Multi-Level Perspective view, we know that “transitions are competitive [and] existing energy systems and infrastructure can dominate and suppress threatening innovations.” (p.205).

All these arguments, Sovacool argues, stem from a “historical record [which] does seemingly support the mainstream view that energy transitions all take time.”(p.205). Grubler provides several examples of lengthy energy transitions, on some occasions, extending more than a century.

The evidence looks strong enough to Smil as for him to say:

“Energy transitions have been, and will continue to be, inherently prolonged affairs, particularly so in large nations whose high levels of per capita energy use and whose massive and expensive infrastructures make it impossible to greatly accelerate their progress even if we were to resort to some highly effective interventions…” (p.206) [italics added]

Sovacool concludes that the extensive literature and numerous examples of slow energy transitions have led many scholars to “presume that shifts and changes will take many, many years [-]. Fast transitions, when they occur at all, are considered anomalies, limited to countries with very small populations or unique contextual circumstances that can hardly be replicated elsewhere.” (p.207). Luckily, he demonstrates us that this is not necessarily true.

Reasons to believe energy transitions can be swift

Sovacool provides a few reasons why current and future energy transitions can greatly outpace their predecessors. Most importantly, he suggests we may have learned enough from past transitions so as to be able to put in place the right incentives to accelerate future ones. However, I think it is the most interesting to have a look at historical examples of swift transitions.

“Contrary to the legitimate reasons and arguments presented in favor of the longevity of energy transitions, some empirical data suggests that under certain conditions, they can occur rather speedily. [-] Examples of rapid national-scale transitions in energy supply do populate the historical record” (p.207)

Some of these rapid energy transitions are more interesting than others in the context of our need to move towards global sustainability, depending on their main driver.

Sudden resource availability. Kuwait and the Netherlands transitioned into new energy sources – oil and electricity in Kuwait, natural gas in the Netherlands – driven by the discovery of abundant resources in their territories. The outstanding speed of their transitions is, however, relatively uninteresting from a sustainability transition viewpoint. These transitions demonstrate that a strong economic incentive can greatly accelerate energy transition. But most countries already know their renewable energy potentials. Only an unexpected breakthrough in renewable energy generation (or a complementary technology) that made the resources suddenly available at much lower cost could trigger an analogous energy transition. NB: this seems to be many people’s bet with solar photovoltaics, wind energy and battery storage and their cost evolutions.

Sudden resource unavailability. France and Denmark transformed their electricity systems to cut their addictions on imported oil in the midst of the 1970s oil crisis. We already saw how unavailability (or risk thereof) can trigger technological changes (see the previous post). Here, Sovacool shows us how it can also trigger technological transitions at an astonishing speed.

Sovacool warns us that such transitions succeeded partly thanks to very particular circumstances, for example, the highly centralized institutional framework in France. However, regardless of this caution, there is no reason to think these transitions could not happen again. (Un)fortunately, consumer countries learned the lesson and tend to have diversified oil and gas suppliers. Additionally, new fossil fuel production technologies such as fracking or ultra-deep wells have decreased the likelihood of an imminent shortage. Though these techniques may even increase the risk, points Jamie Webster.

Policy-driven rapid transition. The example from Ontario, Canada, is perhaps the most interesting, albeit also the more modest in geographical scope and technological substitution.

According to Sovacool, the primary motivation for the transition was public health. The coal phase-out “was estimated to save $4.4 billion per year in health, environmental, and financial damages” (p.210). To achieve this goal, Ontario committed “more than $21 billion in cleaner sources of energy including wind, hydroelectricity, solar, and nuclear power, as well as $11 billion in transmission and distribution upgrades and other investments in energy efficiency” (p.210).

If countries with a share of coal electricity between 15% to 35% had decided to follow Ontario’s lead, more than a dozen countries would have now a coal-free electricity mix. Save the particularities of Ontario’s case, its transition out of coal proves that rapid energy transitions need not an exogenous shock. 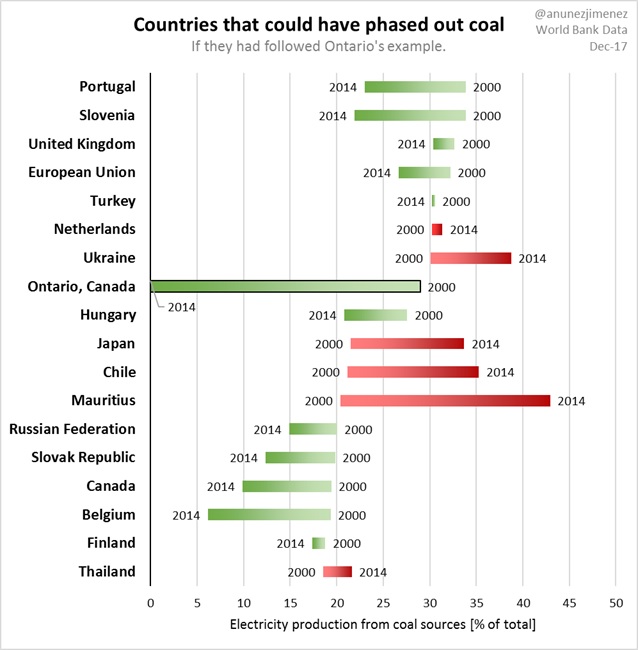 I want to believe

Sovacool shows us in his article that speedy energy transitions can happen and have indeed happened, within a decade or two. What’s more, with the example of Ontario, he excludes the necessity of an exogenous shock to the energy system. Beyond his empirical evidence, he cites new drivers that can accelerate future energy transitions:

I agree with Sovacool’s conclusions, where he asks for caution in interpreting fast energy transitions given their complexity and specificity:

“The implication here is that energy transitions have no magic formula.” (p.212)

Though I would like to end with what seems to me as the key for new rapid energy transitions:

I learned from this paper and post that energy transitions are not necessarily lengthy, slow processes. Energy transitions can be slow and gradual, or swift and sudden. What’s more, it seems that whether the next energy transition is slow or fast will significantly depend on our current policy choices and the commitment with them. We could transition our global energy system in one decade or two… if we create a strong enough movement and push for bold policy-making.

The authors cited by Sovacool published a response to his paper criticizing it. Thanks Tobi for sharing the article: Grubler et al. (2016) Apples, oranges, and consistent comparisons of the temporal dynamics of energy transitions

In Sovacool (2016), “historical evidence of “grand” or global energy system transitions taking decades to centuries to unfold contrasted with highly selective recent and rapid examples of mostly incremental technological change make for an engaging argument. But the observed contrasts are due to the apples-and-oranges comparison between transitions that are measured differently, defined differently, characterized by different processes, and explained differently.”

A few months later, Sovacool and Geels (2016) responded with a short communication. Thanks Julius for sharing the paper: Further reflections on the temporality of energy transitions: A response to critics

“We [investigate] the multi-dimensionality of energy transitions as well as transition speeds for different parts of energy systems at different scales. We then call on analysts to consider transition speeds and scalar levels. We also argue for focusing on accelerated diffusion driven by rapid changes in cost, improvements in technology, or other factors.”

I hope you enjoyed the second post of the “Paper Summary (PS)” series. Each month, I will publish a new post based on a particularly interesting paper and link it to current developments. Check out past and upcoming PS-series posts: